Barbaresco is a magical wine and considered one of the world’s greatest wines. It is appreciated by wine enthusiasts, oenophiles, and collectors all around the world.

I’m Tony Margiotta, author of Hidden Gems of Italy. Make sure you subscribe to gladiator wine tv so you don’t miss out on the inside scoop on Italian wine.

Barbaresco is not the name of a grape, but instead the wine is named after the town from which the wine originates from.

Barbaresco is a small village in the Piemonte region in northwestern Italy. Basically near the top left of the Italian boot. And not too far from neighboring France about 3 hours driving.

Barbaresco derives from latin “barbarica silva” which means Barbarian Forest named by the romans who were describing the dense forests that covered the land.

And actually Barbaresco is not just one of today’s most coveted wines but It’s a wine with ancient origins. The writer Titus Livius also known as Livy in English was a roman historian and had already mentioned this wine in his monumental book called The History of Rome, written over 2000 years ago.

And back in 1799 the Austrian General Melas required the Nebbiolo of Barbaresco to celebrate their victory over France.

The village known as Barbaresco is found on right bank of the Tanaro river and it’s architecture maintains a medieval style to this day. The countryside surrounding the village is where viticulture can be found and it’s terrain is characterized by steep slopes, not too high, maximum 1000 fee above sea level in certain places and covered in vineyards for making Barbaresco. It’s no accident that the vineyards are planted on these slopes because it’s one of Barbaresco’s secret ingredients.

Barbaresco wines are made with 100% Nebbiolo, a native Italian grape, and arguably one of the finest wine grapes in the entire world.

Historically, Nebbiolo grapes have grown around the area of Barbaresco for thousands of years.

Barbaresco wines are constantly being compared to Barolo also one of the worlds best wines, but we’ll save the comparisons for another video in this Barbaresco wine series.

That’s because Barbaresco stands alone as a fine wine with its own unique flavors, textures, aromas.

What makes Barbaresco so special compared to other age worthy wines is that it’s already enjoyable when it’s young. So while the wine can age for 3 decades if stored properly, the truth is that you can enjoy Barbaresco for the entirely of it’s life cycle. And actually that’s the best part about it. Let’s say you buy a case of the 2017 vintage for example. And you’re buying that case so you can taste it one bottle at a time, while it ages not after it ages. That’s because in a relatively short period of time, say every 4-6 months you’ll sense some changes in your Barbaresco compared to the last time you had the same vintage. And these changes are as pleasing as they are magical. Who has the time to wait 10 or 20 years for a wine to start getting good anyway??

So I’d recommend you pickup a half case or even case of every new vintage so you can taste and follow the evolutionary journey of Barbaresco in the bottle.

The best Barabrescos full bodied but light on the palate. This is a very different sensation compared to full bodied but heavy Cabernet Sauvignon for example. Barbaresco’s are aromatic, elegant, with a long finish. Red fruits, rose petals, light spices, a touch of earth are all common characteristics.

For some people, it’s a wine that might not impress on the first sip. But as you continue to sip on this wine over a fine dinner and after dinner, it’s like the wine seduces you without you noticing when or how, and you become spellbound by it’s powers.

This video is part of a series of Barbaresco videos I’m putting out so be sure to keep a look out for them and if you don’t want to miss out on future videos about Barbaresco and Italian wine make sure you subscribe to gladiator wine tv and I’ll see you the next video. 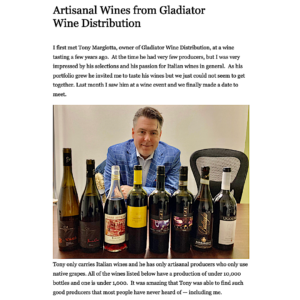 Many thanks to wine writer and wine consultant Charles Scicolone for putting together a lovely article about my wine portfolio. Click the link below to

From losing weight, to eating healthier, to getting organized, we’re all familiar with common New Year’s Resolutions. You may have had a wonderful holiday season